When I started publicising our first Settle Soup I was contacted by Kirsty McQuire who wanted to make a piece about us for the BBC Radio 4 show Saturday Live. At the time there were only a handful of community soups in the UK and most were in large towns or cities and she was interested in why we wanted to have a soup in a rural Yorkshire Dales market town. So, Kirsty came to visit in July 2015 and spoke to many people throughout the day, her piece about Settle Soup was eventually broadcast on Saturday Live in October 2015.

I was busy moving tables and cooking soup in the afternoon so Judith took Kirsty on a little tour of Settle. 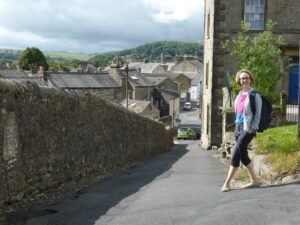 The weather was beautiful for their stroll around town and Kirsty was particularly impressed with our quirky Gallery on the Green, the art gallery in an old phone box. 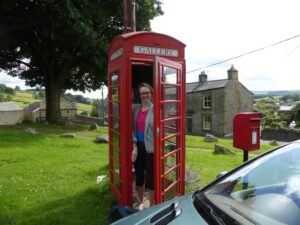 You can listen to our piece on Saturday Live on iplayer http://bbc.in/1OMJeQh we are featured in the intro and the main piece is about 33 minutes into the show.