We were delighted to receive a small grant from Bettys Trees Fund earlier in the year – yes, that Bettys of tea shop fame.

With a long-standing passion for trees, Bettys support Yorkshire based projects to make an impact for their communities through their ‘Trees for Life fund’: https://www.bettys.co.uk/trees-for-life

As a result of Bettys support we have been able to plant some heritage apple trees, sourced from Rod Everett of the Middlewood Trust based at Roeburndale, just beyond Wray and into Lancashire. The Middlewood Trust exists to advance research and provide education for public benefit in techniques of agriculture, forestry, wildlife and countryside management, building, energy conservation and human lifestyle which are in tune with the natural cycle and do not upset the long term ecological balance.

As part of this Rod has been interested in growing heritage varieties and ones that do well in our Northern climes. We have been particularly taken by the history of three of them and look forward to them bearing fruit once established… 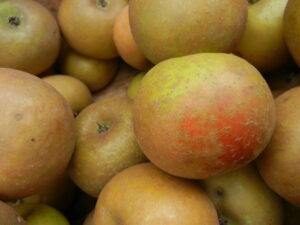 Ashmeads Kernel – in the photo opposite, is a late dessert from the 1730’s. A  Gloucester Russet apple with strong sweet sharp intense flavour. Pick Oct, use Dec – Feb.

Goldmedal – raised by Troughton, a nurseryman at Preston, and introduced in 1882, it was originally named Ryland Surprise. Flesh soft, white and slightly acidic. Second early to mid season.

Ribston Pippin – late, sweet dessert variety. Believed to have been raised in 1707 from a pip brought to Ribston Hall (near Knaresborough) by Sir Henry Rouen. It was listed 1769 by William Prefect of Pontefract and well known by the early 1800s. The original tree died in 1835, but a shoot grew up from its roots to give another tree, which lived until 1932 when it blew over and died. Grown in gardens all over the country and also for market around London, Kent and elsewhere in the 19th century. Intense, rich, aromatic flavour with juicy, firm, deep cream flesh. More acidity than Cox. Not as delicate, but stronger with great depth and length, a most highly esteemed Victorian dessert apple. So there you have it!

Along with the apple trees we have also planted some fruit bushes – blackcurrants, raspberries, gooseberries and a honeyberry – so pies all round next year!